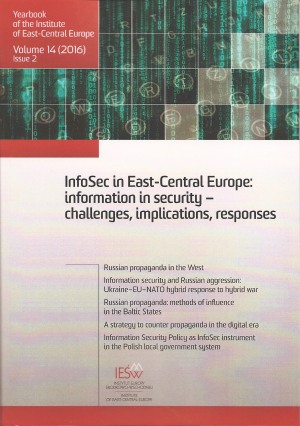 Summary/Abstract: In this contribution, information security and hybrid war are examined through the media terrain of modern conflict between Russia and other nations. This paper explores common instances of reaction to Russian information aggression against Ukraine, the European Union and other countries. In their battle for public opinion in Russia itself, Europe and overseas, state-controlled Russian media employ well known or new methods of propaganda. Russian agents of influence work not only at RT Channel worldwide but can also make the respected media in the United Kingdom, France or other countries publish Russian spin-doctors’ messages. The internet has also become a battlefield for Russian trolls and hackers. The common ways of responding to these challenges by Ukraine and other East-Central European countries are examined and discussed to identify their weaknesses.