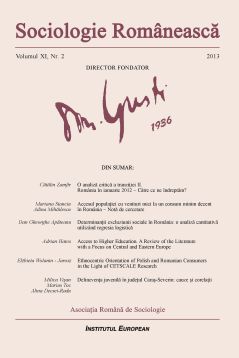 Summary/Abstract: The article is reviewing the mainstream literature on the issue of expansion of higher education and the evolution of inequalities of access in tertiary cycle, with a special concern for the case of Central and Eastern Europe, and for two cases which are rarely considered together in the literature, those of Romania and Hungary. Cross cohort investigation of access to higher education, with a focus on class differentials, have highlighted the persistence and even increase of inequalities in access between youth of privileged and underprivileged classes. While communist regimes were not successful in leveling differences between classes in access to higher education, the inequalities have been aggravated during the last two decades of expansion in higher education, which have been peculiarly dramatic in both Romania and Hungary. In order to explain the enduring inequalities, the review highlights, besides the usual factors and mechanisms, the impact of qualitative differentiation, which can be understood in the frame of the theory of effectively maintained inequality. Considering prospects for future research, one should be beware not only of the probabilities of entering or not entering (or graduating), but also of the differentiated likelihoods of specific status groups and class categories to enter and graduate the various types of higher educational institutions and fields of study available. Contextual variables describing local and national policies and measures, as well as special institutional features should also be taken into consideration.