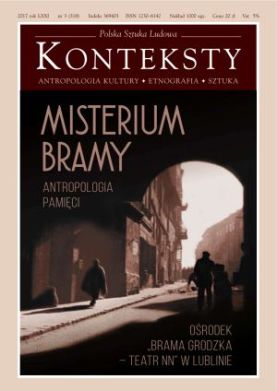 „Tam przemówi do mnie dusza Wołynia”? Scenografia polityki na Targach Wołyńskich w Równem w 1934 roku
“There the Spirit of Volhynia Will Speak to Me?”. The Political Setting of the Volhynian Fair Held in Równe in 1934

Summary/Abstract: The Fifth Volhynian Fair was organised in Równe in 1934, i.e. in conditions of a radicalisation of the prevailing social mood and a decline in support for the large-scale political project realised in Volhynia by voivode Henryk Józewski. The project, known as the Volhynian experiment, assumed the possibility of retaining the specific social structure of Volhynia, within which the Ukrainian-Polish-Jewish genius loci of the region would be protected. This “trial programme” of sorts was to serve as a matrix for the Polish policy towards the national minorities. Its success was decisive for the future of a number of correlated activities, which foresaw within the so-called Promethean programme the exploitation and steering of pro-independence tendencies within the USSR for the sake of waging a struggle against international communism. In 1934, when the vitality and political forces of Józef Piłsudski, the patron and protector of Józewski, conspicuously deteriorated and the Volhynian experiment was becoming increasingly inconvenient for the Organisation of Ukrainian Nationalists, the voivode faced the threat of losing the mandate of both sides – Polish and Ukrainian. In this situation, the Fifth Volhynian Fair was turned into a representative platform resounding with praise for his policies and proving to be a powerful propaganda volley. Józewski was supported by an “art-decoration commission” composed of Teresa Roszkowska and Aleksander Jędrzejewski, who designed a setting that, according to their concept, accentuated the historical cohesion of the region. Thanks to words, gestures, and images, the Fifth Volhynian Fair was to become a performative structure transforming the socio-political reality of Volhynia according to a lucidly profiled vision of the Eastern Borderlands.