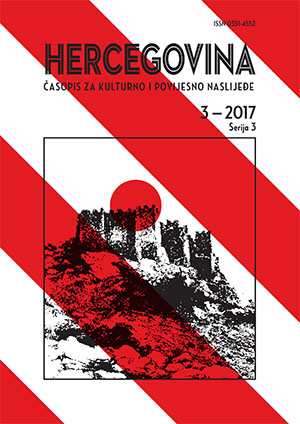 Controversial topics from the life of Stjepan / Ahmed pasha Hercegovic

Summary/Abstract: Duke Stjepan Hercegovic Kosaca (1456? - 1517), the youngest and most certainly the most beloved son of Herzog Stjepan Vukcic Kosaca, although later becoming as Ahmed Pasha Hercegovic a distinguished and successful Ottoman administrator, minister, land and sea commander, a statesman and a poet, has remained a partially controversial figure in South Slavic, South European and Turkish historical reviews. Even today it is not easy to depict his way of life. Historians disagree on the origin and the name of his mother, his year of birth, his sending or departure to the court of the Sultan Mehmed the Conqueror, clash with his half-brother, Duke Vlatko, succeeding or failing to take over the inheritance of his father Stjepan and his mother, Barbara, preserved in Dubrovnik, the names of his children, as well as some disputable places or duties from his forty-year Ottoman life path to his unreasoned death in 1517. In this article, the author puts more light into almost all controversial issues by using primarily, presently available, published and unpublished sources and bibliography in the archives and libraries of Dubrovnik, Venice, Milan, Florence, Rimini, Sarajevo and Istanbul. At the end of his paper, the author depicts Ahmed Pasha Hercegovic as the center of confronting spheres of the ruling global-Ottoman class with the perspectives and desires of the globally- losing and oppressed masses of South-European and Asian peoples, and recommends further study of the role, contribution and faults of Stjepan/Ahmed Hercegovic in the global historical and political context of his time.