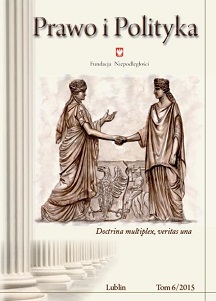 Summary/Abstract: A resolution passed in 2012 by the United Nations General Assembly on upgrading the Palestinian observer status to the rank of a non-member observer state provoked vivid discussions on political and legal aspects of the Palestinian statehood. Following this resolution the government bodies of the Palestinian Authority in official documents refer to their entity as “the State of Palestine”, however many countries seem to decisively oppose to consider the above-mentioned resolution as the basis for recognition of the Palestinian statehood. In their opinion, only on condition of fulfilling the commonly acknowledged criteria of statehood, i.e. assuming the full control as well as exercising an independent power (including capacity to maintain foreign relations) over the population within the specified territory under its control may Palestine be recognized as a sovereign state. Taking the position that the above criteria represent the level of legitimacy of the state-building process and are regarded as constituents of the definition of a state under the international law, the author of the present thesis has undertaken to find the answer to the question whether Palestine has complete control over the specified territory, whether Palestinians form a nation and whether the Palestinian authorities can be regarded as effective and capable of representing its entity in international relations. This article makes the point that a decision on recognition of a geopolitical entity as a state is more political than legal in character and it remains the matter of discretional decision of other members of international community, therefore the process of recognition of Palestine depends, de facto, on current trends in international politics and the balance of forces in the international arena.