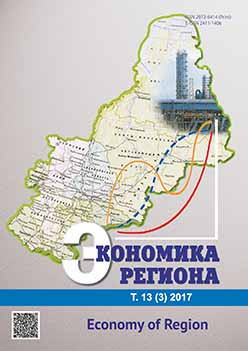 Summary/Abstract: The article is devoted to the creation of efficient regional logistic infrastructure that has currently a special relevance. The additional task of this problem is a warehouse network formation. The efficient location of warehouses is one of the priority objectives for cross-border regions as it allows them to benefit from membership in a global supply chain, promotes the creation of additional jobs and, finally, leads to the growth of Gross Regional Product (GRP). The authors offer an approach to determine the location of distribution centres and warehouses in the territory of the regions of the Russian Federation. This approach allows solving the problem of the efficient location of warehouse network in a region taking into account its key indicators of socioeconomic development. The implementation of the approach identified the indicators that have a significant impact on a choice of the location of warehouses of a region. Methodological framework of the conducted research includes the methods of ABC and cluster analyses. That provides the identification of the cities and municipal districts of a region, in the territory of which it is expedient to locate warehouses. The developed approach was tested on the example of the Volgograd region. The solution of the problem of warehouse network in this region belongs to the priority one, considering its geographical position and industrial capacity. The analysis of indicator values for the period of 2010–2014 by means of the methods of classical and modern ABC analysis as well as the two-stage cluster analysis allowed the territorial binding of the warehouse network in the Volgograd region. Further, the research showed that when splitting the cities and municipal districts of the region into clusters, the greatest influence is made by such indicators as investments into fixed capital, goods turnover of the motor transport and transportation of goods by the motor transport.