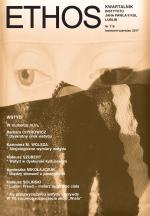 Summary/Abstract: The article is based on an analysis of interviews with persons who provided care for their senile sick relatives at home. The caregivers’ experience is presented against the background of extensive scholarly literature concerning the emotions of shame and disgust. The first part of the paper shows a wide spectrum of attitudes towards assuming obligation of care over elderly sick relative and points to the fact that family caregivers are regarded with less social compassion than old and sick persons themselves. As a result, the knowledge of the diffi culties of caregiving is not sufficiently widespread. The second part describes the relationships between shame and disgust, indicating that the former is a more fundamental emotion than the latter. Part three presents the following sources of shame experienced by caretakers: (1) The ‘new gospel of health,’ i.e., a model of healthy life that has replaced the traditional religious model. The paper shows an intellectual bankruptcy of the new model in the face of actual, shame-generating challenges related to death and dying. (2) An increase in the significance of aesthetic values in contemporary societies (especially in the metropolitan communities of the West), which leads to intensifi ed feelings of disgust towards senile sick relatives, and of the the related shame. (3) An experience of the transformation of the anticipation of the sick relative’s death into the wish the sick relative was dead, which appears both radically inconsistent with the role of caregiver and morally wrong and, as such, evokes shame. (4) Hypocrisy, duplicity in the caregivers’ behavior, based on the belief that one cannot be sincere in a conversation with the sick, which infringes equality and results in manipulation, causing shame, especially in the inexperienced and simultaneously morally sensitive caregivers who remember the old and sick relative as a healthy individual. Shame may be either brought to consciousness and worked through by the caregiver (it may then play a positive, morally elevating role), or denied (leading to aggression). The fourth part of the paper focuses on the syndrome of resistance to shame and on its denial, describing the consequences of those phenomena for the culture of the home and mutual social relationships. The concluding part discusses the logic of shame: from the emergence of shame (its source), through its experience, to denial and repression, to violence, as the process was presented by Thomas Scheff. The motif of aggression towards the elderly is described on the basis of a literature review, confi rming and complementing Scheff’s view.