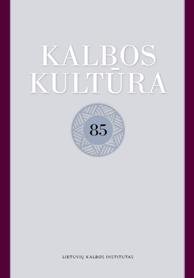 Summary/Abstract: Antanas Salys was one of the most famous Lithuanian linguists of the middle and second half of the 20th century prominent in the fields of dialectology, onomastics, phonetics, terminology and standard language codification. The article deals with Salys’ activities in the fields of lexicology and lexicography. Salys made a big contribution to the codification of the Lithuanian vocabulary. He wrote many articles about the origin, word-formation and meaning of various words and created quite a few neologisms many of which became widespread in the usage of the standard language. Salys was keen on the Lithuanization of borrowings and wrote a theoretical article about the principles of neologism creation. As a lexicographer Salys had his input in the establishment of theoretical principles of the academic edition of Lietuvių kalbos žodynas (Dictionary of the Lithuanian language). He was also one of editors of Kalbos patarėjas (Language advisor) and from 1947 – one of the compilers of so-called Niedermann’s dictionary (Wörterbuch der litauischen Schriftsprache). In 1939 Salys became head of the Language Department at the Institute of Lithuanian Studies, from 3 December 1941 he was director of the Institute of the Lithuanian Language. Here he took care about the matters of Lietuvių kalbos žodynas. Salys had discussions on various issues of editing with the editor of the dictionary Juozas Balčikonis in Mokslinė pagalbinė komisija (Scientific advisory commission) and in the press. This discussion always stayed within the limits of correctness and during the Second world war when the front was approaching he rescued the card files of the dictionary and took them to safety. After exile to the West he spoke positively about the compilation work of the dictionary and heavily criticized attempts to include ideological matters. Salys wrote the first wider study about the history of the Lithuanian lexicography for Lietuvių enciklopedija (Lithuanian encyclopaedia, Boston, USA).