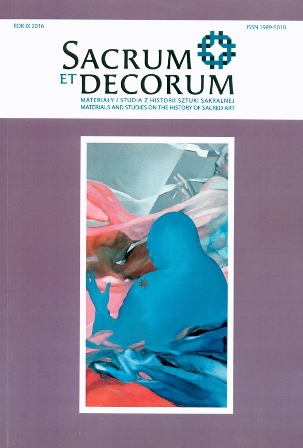 Summary/Abstract: The revival of church art in Romandy in the interwar period was as noteworthy as that in France, even though it is not known as widely. The article is an attempt at a general characterization of the work by Groupe de Saint-Luc et de Saint-Maurice carried out mostly in countryside churches of Romandy. Nearly sixty first-class ensembles of decorations of church interiors executed over the span of twenty-five years (1920–1945) offer a remarkable testimony of the group’s activity. Its realizations were created by several artists among whom only some declared themselves to be regular members of the group; others – like the well-known Italian painter and art theorist Gino Severini – were only loosely associated with the group. Its existence and activity is a phenomenon whose success can be explained by some particularly favourable circumstances (despite the economic crisis of the 1930s) and the close collaboration of three significant individuals: the driving force and the actual founder of the association was the Genevese painter, decorator and writer Alexandre Cingria (1879–1945); the designer of most of the churches decorated and furnished by the members of the group was Fernand Dumas (1892–1956), a talented architect and great organizer; the association could also always count on the support of the Catholic Bishop of Lausanne, Geneva and Fribourg in the period 1920–1945 Fr. Marius Besson (1876–1945), who was keenly interested in art. The deaths of Besson and Cingria, the most important figures in the association’s activities, mark the end of its existence in 1945.