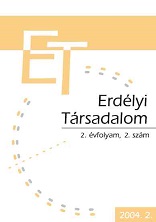 Summary/Abstract: The authors conclude their analysis with the warning that the subject of the rates and number of Hungarians and half-Hungarians in Transylvania should be treated more delicately. It is certain that the ethnical losers of the socialist industrialization and village-to-town migration were the Transylvanian cities where, before the First World War, the hungarian inhabitants formed a majority - in 1956 Kolozsvár, Hunyad, Nagyvárad etc. were mostly hungarian cities. In 2002, only Szalonta and Érmihályfalva could be counted as such. Previous researches failed to notice a group of communities where changes seemed to favor the numbers of the hungarian population. Future strategies have to build upon this fact.The ethnical homogenization of the villages was a success especially in villages lying close to the cities, and in strongly industrialized communities. But in the traditional hungarian ethnic enclosures (in Kalotaszeg, Mezőség) we can distinguish a group, where the rate of hungarian inhabitants has grown.