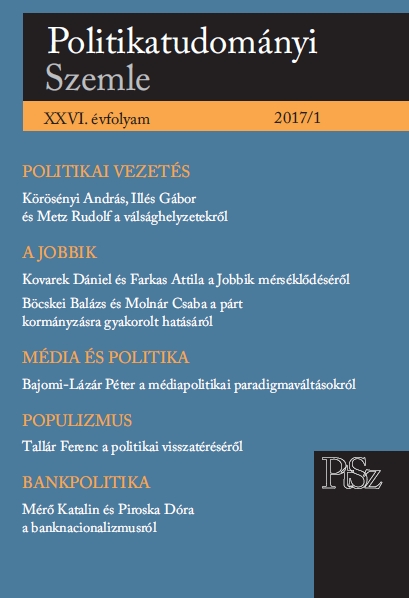 Summary/Abstract: Jobbik (The Movement for a Better Hungary) is generally the subject of scholarly attention due to the anti-gypsy sentiment typical of the party, its tone of speech ignoring political correctness, and its far-right connections. Nonetheless, in the past three years the tone of Jobbik’s campaign messages has become substantially more moderate, party ofﬁ cials distanced themselves from racist and anti-Semitic statements, eventually declaring that the aim of Jobbik is to reposition itself as a ‘real people’s party’. Given the freshness of this transformation process, only a handful of scholarly works investigated the topic until now, and even if doing so, the literature almost exclusively focused on the analysis of Jobbik’s parliamentary elite, and its management. This article seeks to analyze and understand the process by comparing Jobbik’s candidates ﬁ elded in single-member districts in 2010 and 2014. Conclusions are drawn from quantiﬁ ed content analysis of short candidate introductions (résumés and pledges), accompanied by the analysis of databases with variables on political career, electoral experience and former partisan afﬁliation.