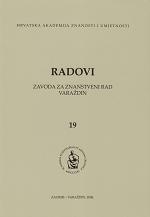 Summary/Abstract: On the basis of archive materials and newspaper articles as well as other literature, the author demonstrates in this paper how the city of Bjelovar and its surrounding faced the dissolution of the Dual Monarchy at the end of 1918, which was followed by number of political and social problems. Anarchy and chaotic climate coupled with huge enthusiasm and spirit illustrate the circumstances in which the new State of Slovenians, Croats and Serbs was being created, which was subsequently transformed into the Kingdom of Serbs, Croatians and Slovenians. In that turbulent situation while the army, penetrated by republican mood, was collapsing, the robberies and violence were growing rapidly. The National Council of the State of SCS and its local Commi ees a empted strongly to assure stability and security. They supported establishment of branches of national watch in every larger village in order to make the transition into the new social and political order as painless and as safest for the lives and property of their citizens as possible. It has to be pointed out that in the political practice of the new government all those political streams which did not follow the dominant stream of the then Croatian politics and the politics of the State of the SCS National Council – the pro-Yugoslav policy, were extinguished.