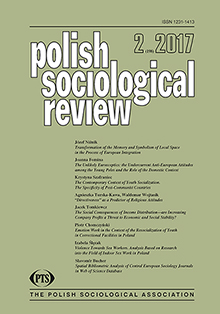 Summary/Abstract: This paper examines the relation between "directiveness" and levels of religiosity (conceptualized as the three dimensions of "closing-opening," "clericalization-secularization," and "dogmatism-permissiveness"). The model used has been empirically verified and is a consequence of previous studies proving that religiosity in itself generates both pro-social attitudes (especially in regard to an individual's own religious group) and attitudes of aggression toward "outgroups." Researchers have also demonstrated that religion can be a factor that inhibits actual aggression through values such as self-control of negative emotions or impulsive acts. This study finds that the model presented is statistically significant in terms of dimensions such as "closing-opening" and clericalization- secularization: higher directiveness makes it possible to predict higher "closing" and clericalization. This finding makes it possible to discuss directiveness as a foundation for real aggression and attitudes of discrimination against individuals or groups that pose a symbolic or real threat to the unity of the Roman Catholic community.