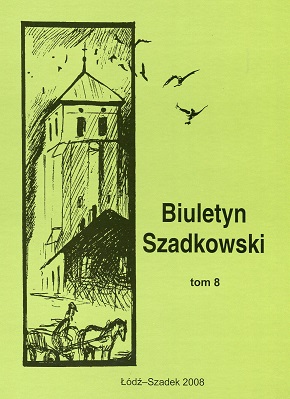 Summary/Abstract: Szadek, one of the oldest towns in the Łódź region, grew on the crossing of mediaeval routes connecting such cities as Piotrków, Uniejów, Łęczyca and Sieradz. Such location, strategic in terms of communication links, was favourable to Szadek’s development and contributed to the strengthening of its role as an urban settlement performing central functions for the surrounding areas, particularly with regard to administration of territorial (the seat of local government of various levels), judicial and ecclesiastical affairs. There is evidence suggesting that as far back as the 12th century Szadek was functioning as a local administrative and economic centre. In the following centuries it became a major settlement unit providing diverse important functions to the whole district. Today Szadek is a small town which retained only a few of these functions, but nevertheless they reflect its former status on the map of the region. The broad range of services provided by Szadek indicates that it was perceived as a special place in the settlement network. Its changing role and importance as regards the functions performed the historical events which mostly had negative consequences for the town, conducing to its diminished importance on the administrative map of the region and the country.

Pozarolnicza działalność gospodarcza w gminie Szadek Non-agricultural economic activity in the Szadek commune 2004 Młynarstwo regionu szadkowskiego i jego rozwój do I wojny światowej Flour milling in Szadek region and its development until World War I 2005 Kilka uwag o rozwoju Uniejowa w świetle nowych funkcji miasta Some reflections on the development of Uniejów in the light of new functions of the town 2012 WPŁYW RUCHU TURYSTYCZNEGO NA ŻYCIE MIESZKAŃCÓW UNIEJOWA THE IMPACT OF TOURISM ON THE LIFE OF UNIEJÓW'S RESIDENT POPULATION 2013 WSPÓŁCZESNE PRZEMIANY UNIEJOWA W OPINII MIESZKAŃCÓW MIASTA I REGIONU PRESENT TRANSFORMATIONS IN UNIEJÓW IN THE OPINION OF THE INHABITANTS OF THE CITY AND REGION 2013
2021 © CEEOL. ALL Rights Reserved. Privacy Policy | Terms & Conditions of use
ICB - InterConsult Bulgaria ver.1.5.2118