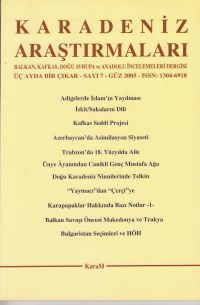 Summary/Abstract: After the 1st World War, the British government oriented its influence in the Southern Caucasus to sut up a Caucasian wall composed of the three regional countries, Azerbaijan, Armenia and Georgia, in order to stop the Bolshevik Russia and to separate the latter from Turkey. Situation changed after the White Army was defeated in the Northern Caucasus, and the three Caucasian states were brought under Soviet control. On the one hand, Turkey considered the Bolshevik Russia as a natural ally against The Western imperialist forces, then invading many parts of Turkey, and on the other hand, made use of the rise of Bolshevism as a cause against the imperialist forces, thus became very strong diplomatically.