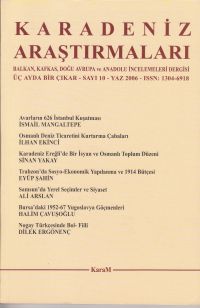 Summary/Abstract: Although the state-ayans (tax farming magnates) relationship in the Ottoman social history has been solved, it is not well defined how the ayan-public relations were. We hear from the people from their complaints about the former. Recent studies show that people might have gathered around different groups of benefit, and entered various relations in this context. Aim of this essay is to contribute to analyzing people-ayan relations in terms of different groups of benefit via the regulation of tax farming on March 9th, 1841, in Bendereğli, known today as Karadeniz Ereğli, and the uprising against Mustafa Ağa, then tax farmer of Safranbolu.