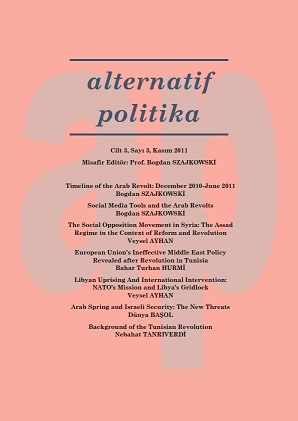 Summary/Abstract: The aim of the article is to evaluate Israel’s security perceptions about the Arab Spring. The study argues that The Arab Spring is the reshuffling of the Middle East by realigned U.S.-Turkish common policies. For Israel the devil you know is more acceptable than the unknown future. Bearing in mind all the results of the surveys showing that Arabs can easily fall into radical Islam, Israel prefers not to enter such a dangerous and risky game for toppling down the old dictators and establishing new regimes. Israel could resist such a change and force U.S. to postpone or cancel their new policies if it were a decade ago, but today she is extremely isolated in international arena thanks to Bibi’s government. On the other hand, Israel struggles to counter the Turkish offenses in diplomacy, has to avoid the ―Iranian Trap‖ that is being set by Iran slowly and carefully for the past few years, and also domestically facing serious crises. All those dynamics are forcing Israel to remain silent unless it breaks the isolation that it fell, and watch carefully the games played by U.S., Turkey and Iran in the Middle East.