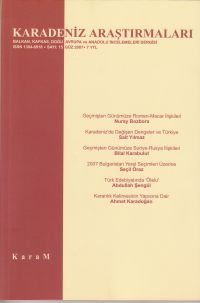 Summary/Abstract: The 2007 local elections in Bulgaria, which went to gallop box six times since the regime change in 1989, was herald of the upcoming changes and new formations to ocur in the next years in this country. In these local elections, which were held after the country's EU membership, and under the targeted European conditions of transparency and justice, brought the DPS, political party of the Turkish minority in Bulgaria, the third rank. This and other developments give clues of expectable results of the general elections to be held in 2009.