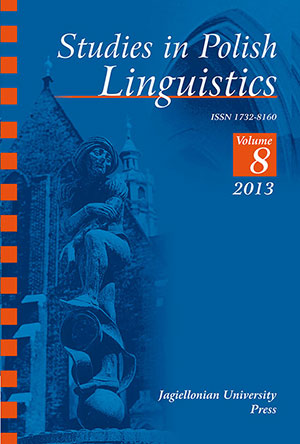 Summary/Abstract: The paper deals with a wider problem of the representation of causative structures in the root-based generative model of morphosyntax illustrated here with the Polish causativizing morpheme roz-. Following Koontz-Garboden’s (2009) analysis of anticausative verbs, we propose that the phenomenon of causation should be separated from the introduction of the additional causer argument brought in by the voice projection. In our analysis roz- is seen as the head of the active voice projection, as opposed to roz- się, the non-active voice head. Such an analysis allows us to account for the distributional properties of roz- versus roz- się in Polish. In the analysis of the typology of roots which can serve as bases for the causative structures taking the roz- voice heads, the typology of roots developed by Embick (2009) to account for the properties of states and stative passives has been adopted, as it seems to work in the case of the roots deriving causatives. The roots appropriate for the predicates of states cannot derive the roz- causatives in Polish, while these appropriate for the predicates of events form such causatives. The analysis ties in with recent proposals in root-based research into verbal valency, and contributes to the overall model of valencyrelated derivations in root-based approaches