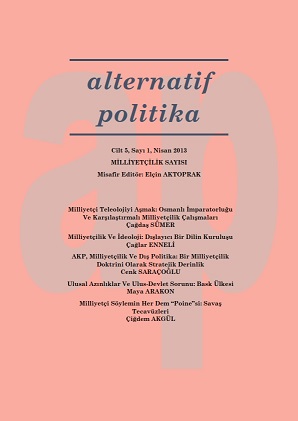 Summary/Abstract: Over the past ten year the academic researches and publications pertaining to the AKP (Justice and Development Party) power in Turkey has culminated into an immensely rich literature, but the main tenets of the nationalist character of this party have not drawn an adequate academic and intellectual attention for various reasons. In an attempt to contribute to this relatively unexhausted discussion, this article will seek to unravel and evaluate the ideational foundations and symbolic components of the AKP’s nationalist position through a close analysis of Stratejik Derinlik (Strategic Depth), a supposedly theory-oriented book written in 2001 by the current Turkish foreign minister Ahmet Davutoğlu. This article argues that at the very crux of the foreign policy outlook sketched out in Stratejik Derinlik is a systematic nationalist doctrine that has been rather haphazardly represented and propagated by the AKP officials. In this respect, Stratejik Derinlik can be treated as a fertile point of departure for investigating the ideological roots of AKP’s nationalism and the role this nationalism plays in the ongoing struggles for political hegemony in Turkey. The fact that the thesis and discourses deployed in the Stratejik Derinlik have functioned in the last ten years as a prominent point of reference for the official foreign policy approach in Turkey also testifies to a dramatic transformation of the Turkish state’s official ideology along the lines of the AKP’s Islamic conservative nationalism.