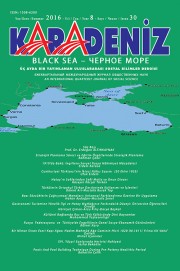 Summary/Abstract: The most strategic demand of the First World War was inarguably the oil. The places which the “Big Powers” mostly focused on for the supply of oil was East Europe, Black Sea, The Caspian Sea region. The operations which aimed to gain the dominancy over the region had continued after the war in 1919 as well as during the war times. The English who knew the strategic importance of the Caucasian Region, did not only control the oil regions in Baku but also caused major industrial losses in Soviet Russia. Apart from the Caucasian Region, the English also tried to gain the unilateral dominancy over the Black Sea, Sea of Azov and the Caspian Sea. The Soviet rulers who were trying to displace the Czarist Russia, also set eyes on the same region for it was vital for their future and to this respect fired the start of an extensive battle. On one hand, while the political, economical and military conflicts were going on, on the other hand, the ideological arguments had become the fundamental element of the expansionist policies. As the main sources of this study, Die Rote Fahne (Vienna), Pester Lloyd (Budhapest), Wiener Zeitung (Vienna) were thoroughly reviewed