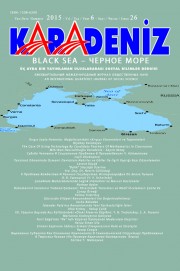 Summary/Abstract: The smallest meaningful units of the sentence, words are the smallest meaningful parts of the tongue that enables people to communicate. The words, basic elements of tongue as a living being, change, develop or disappear in time. The word 'fish', which we encounter in the first examples of Köktürk scriptures, is a general name of the animal which reproduces in eggs, takes breath with gills, lives in water from the chordates, as it is explained in Turkish Dictionary. Fish is a word that has been used for about one thousand and two hundred centuries in Turkish language. In this study, the ‘fish’ has been analyzed within the works from the first written documents to today ones. The origin of ‘fish’ word has not been accepted mutually from the beginning of former period of Turkish language. Rather than revealing a certain view on the origin of this word, there are current viewpoints in this study. The usage of ‘fish’ word in meaning as city and as a fish, itself has been analyzed through its adventure for centuries by exemplifying historical texts. While some words mean many objects or concepts in tongue in the past, they can mean just one of them in time. Although the word was used both as “city” and “fish living in water” or “being injured” as a verb in the past, it has only kept the meaning of fish living in water today.