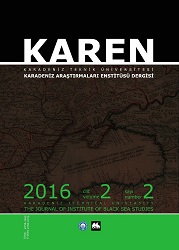 Summary/Abstract: Soon after Industrial Revolution fossil energy resources became extremely one of the irrevocable essentials of humankind. Nowadays, use of fossil energy resources paved the way of several problems. Throughout last two hundred years of human history disagreements to share energy resources led dramatic conflicts and wars broke out. Notably WWII and Cold War were a kind of proxy clashes over energy resources. In 1991 the long lasting Cold War came to an end yet neither energy disputes nor conflicts related to the sharing of energy resources have not ended. Starting with Industrial Revolution so far oil and coal are were unmatched basic energy sources to run the engines of industry. Especially after 1980’s hitherto natural gas and shale gas gained a new status in the energy need of humanity. Because both are more effective, clean and environment friendly. Beside shale gas, Europe and Turkey do not have natural gas reserves nowadays border neighborhood of Russian Federation has rich reserves. In other words Russian Federation is between rich reserves owing Central Asian countries and importer European countries. This fact led Russia to use energy card as a tool of foreign policy. Especially after the collapse of SU, the successor state Russia has not stopped intervening domestic affairs of post-communist countries. While intervening domestic affairs of former Iron-Curtain countries Russia uses numerous excuses such as to protect the rights of Russian originated people, to save its former citizens’ lives despite the fact nobody asked such a protection. Russia also argues that it has cultural and territorial rights in former Iron-Curtain countries. This kind of foreign policy aspects in international relations are called “irredentism” and European states could not force Russia to stop such conflict escalating policies. European dependency on Russian natural gas and energy problems one way or another affects European foreign policy priorities on prevention of Russian irredentism which stirring the region. That is why European states and Turkey to mitigate Russian dependency, looks for a new alternative bypassing Russia and diversify energy sources. TANAP replacing Nabucco is a good chance for such an initiative yet there are a lot to be done for the realization of the Project.