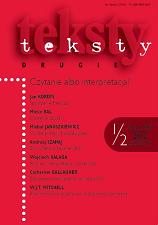 "Co raz stało się rzeczywistością, zawsze pozostanie możliwe...". Śmierć według Nussbauma z przypisem do Bruegla
“What has once become reality, will always remain possible...” Death according to Nussbaum with a footnote to Bruegel.

Summary/Abstract: The article presents the motif of death in the work of the Jewish painter, Feliks Nussbaum who came from Osnabrück, lived in Brussels and was murdered in Auschwitz. Nussbaum was frightened of the catastrophe which can be seen in one of his last works. “The Triumph of Death” depicts a self-portrait of the painter sitting next to joyous skeletons. Civilisation has just ceased to exist. If so far, as a critic has said, in the images of catastrophes, such as in Bruegel, there was more imagination than paint, in Nussbaum's experience, reality and imagination came too close together. The painter is not so much a gloomy visionary, as a sober chronicler who applies the language of symbols.