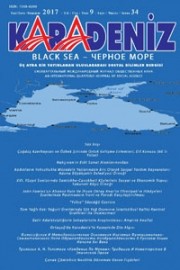 Summary/Abstract: We often talk about the mysterious power about the things we have difficulty understanding. This situation has not changed until today from the first people. Mythologies and beliefs have also been shaped by these mysterious forces. Thus, people have able to explained more easily the events that their power is not enough or they are not capable of any intervention. Turks have to interact with many cultures in terms of the geography they live in, which naturally results in the placement of the concepts of those cultures into the language. It is a clear indication of this interaction that the Islamic terms are Persian, such as prayer and fasting in Turks who adopt Islam through Persians. But in the early times when the Turks accepted Islam, this interaction took time. For example, in Kutadgu Bilig, we can say that the use of the words Bayat, Idi, and Tanrı instead of the word of Allah is a matter of new acceptance of the Muslims of the Karahans. We can also see that the word yek is used instead of the words Şeytan, iblis. With the acceptance of Islam, the Turks, while accepting a new belief system, maintained their tradition from their previous lives by combining this new belief system and into new form. Such behaviors, which called superstitious beliefs by religion, have been accepted as a part of religion by the people and have continued to be exhibited today. To say “touch wood (Şeytan kulağına kurşun)” and to tap the wood three times is one of them. Thus, it has thought to be protected from the evil eye. In this article, we will focus on the word "yılbız" which is used in Anatolia as "touch wood (yılbız kulağına kurşun)".