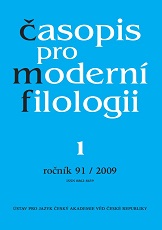 Summary/Abstract: The article deals with the transcription of Hebrew consonants and vowels into the Czech language and offers phonetic transcription as the most useful and phonetically correct system. The system presented in the article is based on the standard phonology of modern Israeli Hebrew. It leaves aside the problem of pronunciation of biblical Hebrew, partly because of lack of space and partly because its pronunciation is artificially reconstructed and therefore does not reflect the contemporary pronunciation of Hebrew as a living and spoken language. The phonetic system presented in the article is compared with other systems already used in Czech literature. Although there are still many things to be discussed, the author thinks that a simple phonetic system should be used as the basic norm for the transcription of Hebrew in popular and scholarly literature. A similar problem of ununified transcription also appears in the transcription of Arabic and other languages written in non-Latin alphabets. This topic deserves further serious consideration on the academic level.