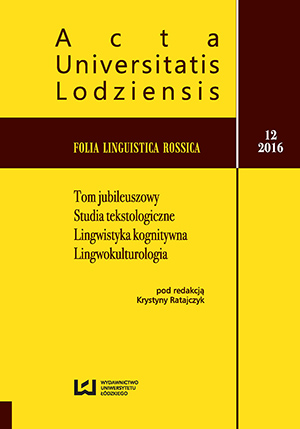 Summary/Abstract: The characteristic of linguoecological problems in the Russian speech is given in the article The short review of the reasons which have caused violations of a linguoecology in the Russian speech in the 20th century – the beginning of the 21st century is carried out. It is shown that violations in linguoecology of the Russian speech in the 20th century have been caused by refusal of traditions of the Russian culture and moral values that has led to numerous phraseological oblivion. Destructions of the Russian discourse in the 21st century are caused first of all by globalization, an assumption of such type of tolerance which borders on permissiveness that leads to the facts of a dehumanization and as a result to violations in a speech of linguoecology. The results of a two years’ research of a genre of the pedagogical remark (method of the included supervision, and also questioning of 1700 informants) are presented in the article; both positive examples of estimation at a lesson, and distructures of a pedagogical discourse are revealed. Dependence between bad tradition of pedagogical censure and rate of application of destructive phraseological units, zoomorphisme is shown. Rhetorical questions as reception of a speech manipulation in a pedagogical discourse are characterized; un-evident distructures are revealed (the distructures-metaphors parasitizing on the idea of disability; the distructures-hyperboles which are based on threat of death).