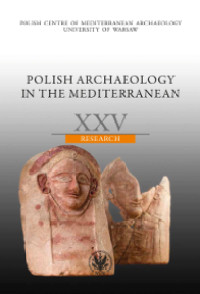 Summary/Abstract: The Roman fort of Apsaros in Gonio (Adjara, Georgia) still holds answers to many issues connected with the Roman military presence on the Chorokhi river in ancient Colchis. In 2014, a Polish team joined the Georgian expedition to carry out excavation in two sectors diretly east of the centrally located principia. The sites were chosen based on a study of the results of geophysical prospection carried out in 2012. Two phases, dated to the early and late Roman periods respectively, were recorded. The early Roman architecture was interpreted as part of the installations and structures of a large bathhouse (balneae), including a mosaic floor in one of the rooms. The building was destroyed at least twice, most likely in a catastrophic fire. The article discusses the stratigraphy and the dating of the early Roman balneae based on glass artifacts and coins.