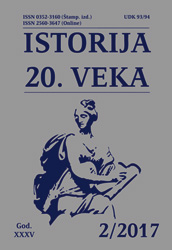 Summary/Abstract: During the Conference of the leaders of non-aligned countries in Cairo, a problem related to the future cooperation and organized international performance of non-aligned countries occurred, without whose resolution it was not possible to go further. In fact, the clash was growing between some conference participants around an important question. Which states should actually be members of the movement? The summit in Cairo had to resolve the dilemma – whether to accept Tito’s concept of universalism or Sukarno’s concept of regionalism; whether to opt for the gathering of all the non-aligned countries, regardless of their geographical definition or to form one regional movement only from the countries that belonged to the Afro-Asian area. An additional problem was that the countries participating in the Summit of Cairo, besides these strategic, technical and operational issues, needed to define their attitude towards the policy of peaceful coexistence. Until then no one had questioned the appropriateness of this policy. However, during the period immediately preceding the Summit in Cairo, in circumstances where the risk of direct block conflict was largely gone, the dilemma appeared: what should be the role of the non-aligned countries in a world freed from confrontation of the aligned? The concept advocated by Sukarno was inspired by the Chinese doctrine of the inevitability of escalation of the international class struggle. Sukarno therefore repeatedly stressed that the main and only task of the non-aligned countries was opposition to the policy of imperialism and neo-colonialism. He considered the conflict between „new“ and „old power“, „poor“ and „rich nation“, „color“ and „white“ to be inevitable. Tito rejected such views as dangerous and as an open invocation of a new world war. He believed that there was a direct correlation between the struggle against imperialism and neo-colonialism and the very policy of peaceful coexistence. The lack of consensus about these key questions at the Summit in Cairo concerning the future strategic orientation of the non-aligned countries resulted in a long-lasting crisis of the non-alignment policy and in the absence of joint and organized action of non-aligned countries in the sphere of international relations.

Pogoršanje jugoslovensko-američkih odnosa posle Prvog samita nesvrstanih zemalja u Beogradu The Decline of the Yugoslav-American Relations in the Aftermath of the First Summit of the Countries of the Non-Aligned Movement in Belgrade 2006 ARAPSKO-IZRAELSKI RAT 1967. GODINEI JUGOSLOVENSKO-AMERIČKI ODNOSI ARAB-ISRAELI WAR OF 1967 AND YUGOSLAV RELATIONS WITH UNITED STATES 2008 Jugoslavija i Sad – Od Sporenja Ka Saradnji Relations During 1963 Yugoslav-American Relations During: From Disputes To Cooperation 1963 2009 Међународни положај Југославије у време првих спољнополитичких акција Џонсонове администрације The International Situation of Yugoslavia at the Times of the First Foreign Policy Actions of the Johnson Administration 2009 Evolucija sovjetskih gledišta prema politici nesvrstanosti The Evolution Of The Soviet Standpoints On The Non-aligned Policy 2012
2022 © CEEOL. ALL Rights Reserved. Privacy Policy | Terms & Conditions of use
ICB - InterConsult Bulgaria core ver.2.0.0914