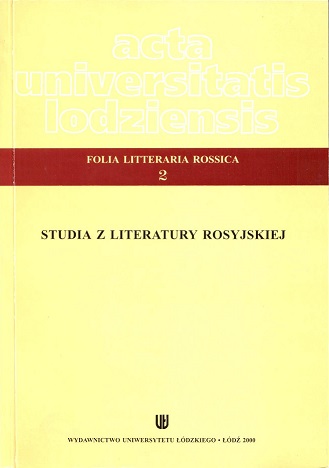 Summary/Abstract: The article presents for the first time two not so well known works of popular literature of the 18th century from the manuscript of the Russian National Library in St. Petersburg: the story About two companions and the story About a noble son. The songwriter's works have been titled: Stories of various peculiar and love cases, emphasizing the thematic and ideological affinity of texts. At this stage of research it is impossible to answer the question whether both "stories" came from a single author's pen (what would be the way of "creating" the text, exploiting popular themes and motifs, and even more or less petrified jokes. ), Or this poem dylogy was composed by one of the copyists-editors. Today, however, you can point to the source of the storytelling ideas of the creators (or creators) of both stories (guys, jokes, intermedia and love romances) and determine the peculiarities of the artist's art workshop. Popular scene. An integral part of the article is the publication of the texts of both works.