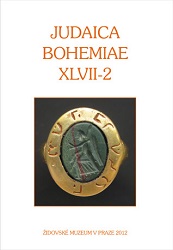 Summary/Abstract: The Faculty of Arts of Prague’s Charles University has a history of Hebrew Studies dating back to 15th century. Interest in textual criticism and the ad fontes movement perpetuated by Renaissance humanists resonated with Prague’s complicated confessional and political situation and led to heightened interest in Hebrew as one of the Biblical languages. As recently shown by Stephen Burnett and Yaacov Deutsch, early modern Christian Hebraism differed from its earlier medieval predecessor in that it expanded the scope of interest to post-Biblical Jewish literature and even to contemporary Jewish customs and religion. Despite the new and seemingly all-inclusive interest in Judaism, early modern ethnographies of Jews contributed to the emergence of modern Jewish Studies to only a limited extent. From the very outset, their authors marred their narratives through anti-Judaic viewpoints and Christian apologetics. In addition, as Stephen Burnett has shown on the example of Johannes Buxtorf’s Synagoga Judaica (1603), the allegedly first-hand descriptive style was usually just a literary tool intended to provide authenticity, while in reality the text was based on previously printed, often misleading non-Jewish sources.