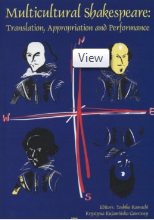 Summary/Abstract: Ever since the first introduction of Shakespeare to a Japanese audience in the nineteenth century, his plays have functioned as “contact zones,” which are translingual interfaces between communities and their cultures; points of negotiation, misunderstanding and mutual transformation. In the context of what is ostensibly a monolingual society, Japanese Shakespeare has produced a limited number of performances that have attempted to be multilingual. Most of them, however, turn out to be translingual, blurring the borders of linguistic specificity. As an example of this, I read A Midsummer Night’s Dream as adapted by Hideki Noda originally in 1992 and then directed by Miyagi Satoshi for the Shizuoka Performing Arts Centre in 2011. Drawing on my experience as the surtitle translator of Noda’s Japanese adaptation “back” into English, I discuss the linguistic and cultural metamorphosis of Noda’s reworking and the effects of its mediation in Miyagi’s rendition, and ask to what extent the production, adapted in post-March 2011 Japan, can be read as a“contact zone” for a translingual Japanese Shakespeare. In what way did Miyagi’s reading of the post-March 11 events inflect Noda’s adaption along socio-political lines? What is lost and gained in processes of adaptation in the wake of an environmental catastrophe?