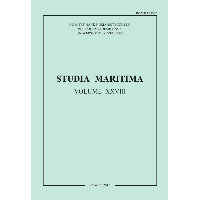 Summary/Abstract: Even during the armed conflicts between Sweden and Poland, in spite of the officially announced blockades and repressive measures, maritime traffic between the two countries did not stop, for example in the years 1655–1660 twenty-five ships set off from Stockholm to Gdańsk and forty-one in the opposite direction. After the war the sea contacts between Stockholm and Gdańsk accounted for 2.5 to 10.5% of the overall maritime traffic of the Swedish capital. Most of the vessels were of smaller tonnage, from 30 to 40 lasts (a unit of weight, capacity or quantity), which made it easier to sail during the sailing season for ships with Polish cereals to the Swedish ports. In the second half of the 17th century the sailing boats that participated in the exchange in majority were punts: they accounted for nearly 50% of the records in the Stockholm customs house. In the 1820s the dominant position was taken over by galliots (50%); the smallest ones had 12 Polish lasts, the biggest ones – 60 (on average about 30 lasts). During the years of peace the biggest operators on the maritime route between Stockholm and Gdańsk were the Gdańsk’s own fleet (24.5%) and the Stockholm’s own fleet (18.5%). The following four positions, each accounting for 10–11%, were occupied by the ports of the German Pomerania (Stralsund and Wismar) and England together with Scotland and the Netherlands. Yet, during the Great Northern War the Dutch were the most important operator (nearly 40%), although in the second half of the 17th century they accounted only for 11%. The second position was occupied by Swedish ships (24%). The participation of the Gdańsk sailing boats decreased from 25% in 1661–1680 to 9% in the first two decades of the 18th century. The crews of the vessels operating between Stockholm and Gdańsk were allowed to take some tiny private cargoes for commercial purposes. Ironware was dominating, especially in the form of iron bars. The crews took out of Sweden over 4% of all the iron bars exported to Gdańsk. The second position was occupied by forest produce (boards, firewood, coal tar, birch tar); yet, a significant part of that merchandise was intended for the needs of the running repairs of the sailing boats and less for the commercial purposes.