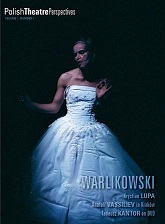 Summary/Abstract: This piece is comprised of a series of commentaries and photographs taken by Stefan Okołowicz, who was present during the final week of rehearsals for the Nowy Teatr’s inaugural performance of (A)pollonia, directed by Krzysztof Warlikowski. The production premiered on 16 May 2009, at the same venue: the former Koneser vodka factory in Warsaw. The commentary that accompanies the images was selected primarily from a series of interviews conducted by Duncan Jamieson and Adela Karsznia with Krzysztof Warlikowski in October 2009 and February 2010. Additional fragments have been included from Warlikowski’s journal entries, his comments in the programme notes to the performance, and from further interviews with the Nowy Teatr actors Magdalena Cielecka and Jacek Poniedziałek, and the company’s regular collaborator Hanna Krall. The interweaving of images and reflections on specific moments of practice provides readers with a rare insight into the Nowy Teatr's collaborative approaches to work on a performance, which is usually little-discussed and closed to public view.