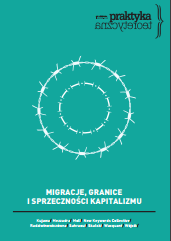 "To nie my przekroczyliśmy granicę, to ona przecięła nas." Biopolityka europejskiego reżimu migracyjnego
“We Did Not Cross the Border, the Border Crossed Us.” The Biopolitics of the European Migration Regime

Summary/Abstract: This article reconceptualizes analytical tools suitable to theorizing the European migration regime by employing concepts developed by philosophers of biopolitics. By referring to border and migration studies, it diagnoses both the crisis of the traditional conceptualization of the border and the crisis of the post-Westphalian political order in Europe. Identifying the end of bordering practices as a result of the intertwining of sovereignty, territory, and population in the context of a neoliberal regime of capital accumulation, the article proposes to treat borders as productive apparatuses (dispositifs). While they support the desirable flows of people, they block the undesirable forms of circulation. In conclusion, the article argues that the co-existence of borderless spaces within the European Union with the arbitrary mechanisms of mobility control applied to non-EU migrants is impossible to maintain in the long run. Keeping the current status quo will result in the obliteration of the inside/outside division and a rupture in the strong link between borders and territory. In effect, the same apparatuses which aimed to make free mobility possible are becoming its main source of danger.