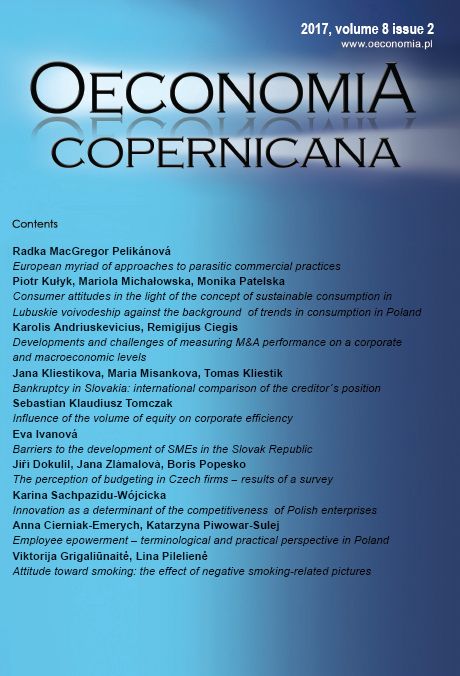 Summary/Abstract: Research background: Bankruptcy shouldn´t be considered only as negative phenomena although its impact is for companies in most cases more than devastating. This change of point of view is invoked by the needs of contemporary socio-economic evolution. If society wants to reach sustainable development, the bankruptcy should be perceived as an immanent part of normal cyclical economic development. Moreover, if the view of bankruptcy is changed in a positive way, it can be a stimulus for innovations, investment and global welfare. But it is not possible without an increase in the effectiveness of national and international bankruptcy law. Purpose of the article: The goal of this study is to analyse the position of a creditor in the case of a debtor´s bankruptcy on the basis of comparative law in the Slovak Republic de lege ferenda. It is because we assume that continuous attention should be given to the issue of the creditor’s position with regard to a debtor´s bankruptcy to achieve sustainable economic development. Methods: The potential consideration de lege ferenda should be based not only on performed legal analysis, but also on performed economic analysis. So, selected countries have been evaluated according to specific economic and legal indicators. We used the interdisciplinary approach based on selection analysis and legal comparative analysis applied to international comparison of the status of creditor and the effectiveness of bankruptcy law from his point of view. Findings & Value added: The applied approach has led us to the detection of the most important insolvency laws, specifically the insolvency laws of the United States and Austria. These legislations were further applied in the context of consideration de lege ferenda over the position of a creditor in the case of a debtor´s bankruptcy in the Slovak Republic.