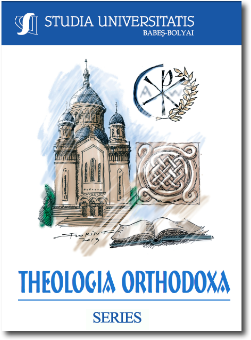 Summary/Abstract: The “shining face” theology as luminous metamorphosis of a visionary has experienced three great challenges: the anthropomorphic controversy, iconoclastic debate and the hesychast dispute. This study attempts to make a mystagogical connection between those three theological developments which are standing all together in God’s holy fire with the ‘unveiled face’. I have imposed myself a line of research into the contemplative spirituality field, which in fact represents a hermeneutical trajectory: Glory in the NT (hidden-revealed or being-energies) – Glory in the NT (theosis as Christification) – pre-nicene Christology (eikonic and apophatic Light / glory) – Desert Fathers (“shining face” christology) – Efrem the Syrian (clothing metaphore) – Dionysius the Areopagite (veils of theurgic rays and Christ’s Presence as immanent transcendence or as tension between transcendent hiddenness and revelation) – Palamas hesychasm (christology of the uncreated light). I am the first who calls the light from the “Shining Faces” of the Desert Fathers as an uncreated light and a discovery of a Hidden pre-Nicene (apophatic) Christology. I have to emphasize that because these two aspects of my ‘disclosure’ (meaning ‘uncreated’ light and ‘hidden christology’ of the Desert Fathers) were inspired to me by the readings in the field of palamite theology which consider that this light of the ascet’s glowing face to be an uncreated light experienced by the body (aesthetically), an inner presence of Christ who identifies himself with His light (apophatic), He Himself being the deifying light as uncreated divine gift. All studies in the Late Antiquity ignore this visionary experience, reducing it to the level of a simple metaphor of light (completing the ascetic quest for “real self”), a metaphor in which the saint’s life is hagiographically (mystifying!) described. A second reason for this ‘blindness’ was a restraint coming from the Evagrian theology that draws attention to the danger of seeking visionary experiences, because in that light there is the risk of an illusory or deceitful demonic appearance. Another reason represints the fact that the hesychast controversy and the theology of the uncreated light as divine energy of the Saint Gregory Palamas’ theology (which in Western media has long been discredited as heretical) have played a negative role in accepting the nature of uncreated light into the “shining face” Christology of the Desert Fathers.