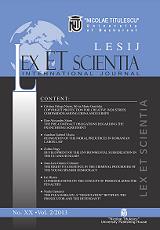 Summary/Abstract: Entry into force of the Law no. 202/2010 regarding some measures to accelerate the settlement of the process, already raises a number of problems of interpretation. According to the Explanatory Memorandum of Law 202/2010 states that: "Unlike the other laws, the Law no. 202/2010 comes into Romanian legislative with the aim of speeding criminal proceedings as well as to prepare the implementation of the new codes, some of the regulations contained in future coding being found in this law." In this respect, in the explanatory memorandum to the bill it was noted that "from the major failures of justice in Romania, the harshest criticism was the lack of celerity in solving cases." As often judicial procedures prove to be heavy, formal, expensive and lengthy it was recognized that judicial effectiveness of justice consists, largely, in the speed with which the rights and obligations enshrined in judgments are part of the juridical circuit, thus ensuring the stability of legal relations to be decided.