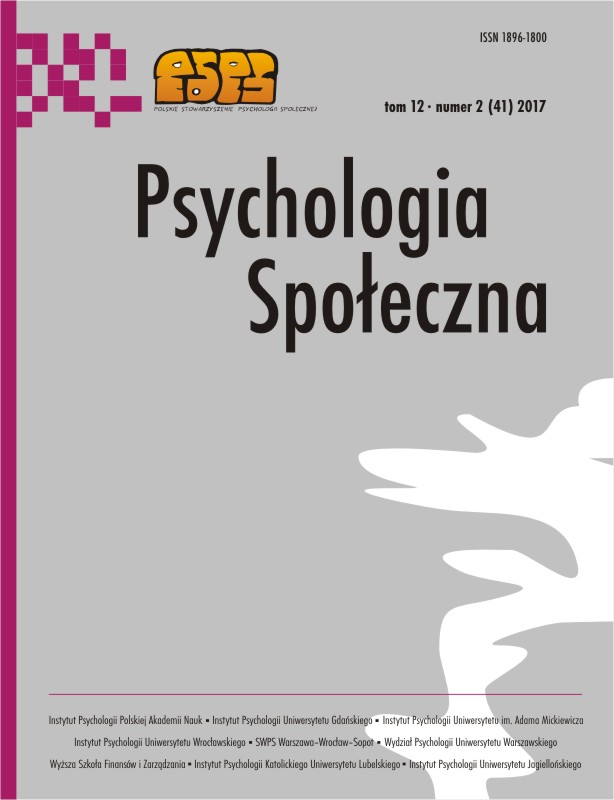 Summary/Abstract: The article presents the description of the construction stages and results of the validity analysis of Type of Attachment Scale, based on the typology of place attachment by David M. Hummon (1992). The Scale consist of descriptions of two types of attachment: everyday and active attachment, and three types of lack of place attachment: alienation, place relativity, and placelessness. A subject is ask to indicate which out of the five that are presented the description best suits their own relation toward their place of living. An examination of psychometric properties and validity of the Scale was conducted in a series of 3 studies on 912 participants. In the study 1 were 586 participants in age between 18 and 72 years (50% female). The participants filled out the prepared Type of attachment scale, Place attachment scale (Williams, & Vaske, 2003), a sociodemographic survey, and series of questions about the affective attitude toward their place of living. In the study 2 were 274 participants in age from 16 to 72. The participants filled out the Type of attachment scale, Place attachment scale and identity scale (Lewicka, 2012), and Scales measuring agency and communion (Wojciszke, Szlendak, 2010). In the study 3, with 52 participants, the reliability of the Scale was examined by test-retest procedure. The obtained results showed that Types of attachment scale is a reliable and valid measure of person-place relations according to categorization by Hummon (1992). Types of place attachment, included in Type of attachment scale, demonstrate a distinguishable profiles of sociodemographic and psychological characteristics. Individuals who identified themselves with everyday and active attachment were significantly stronger attached to the place than the other types of lack of attachment, differing with each other according to the length of residence and a level of place inherited dimension. Non-attached types have a similar profiles, that indicates a low place attachment. The place relativity type can be described as the lowest attached, with the highest mobility, the shortest length of residence and the weakest bond according to earlier generation presence in the place of living. Alienation was connected with neutral of negative attitude toward the place, and was described by a positive correlation with the European identity. A placeless type was reflected by a weak place attachment and low local identity, but a positive correlation with agency.