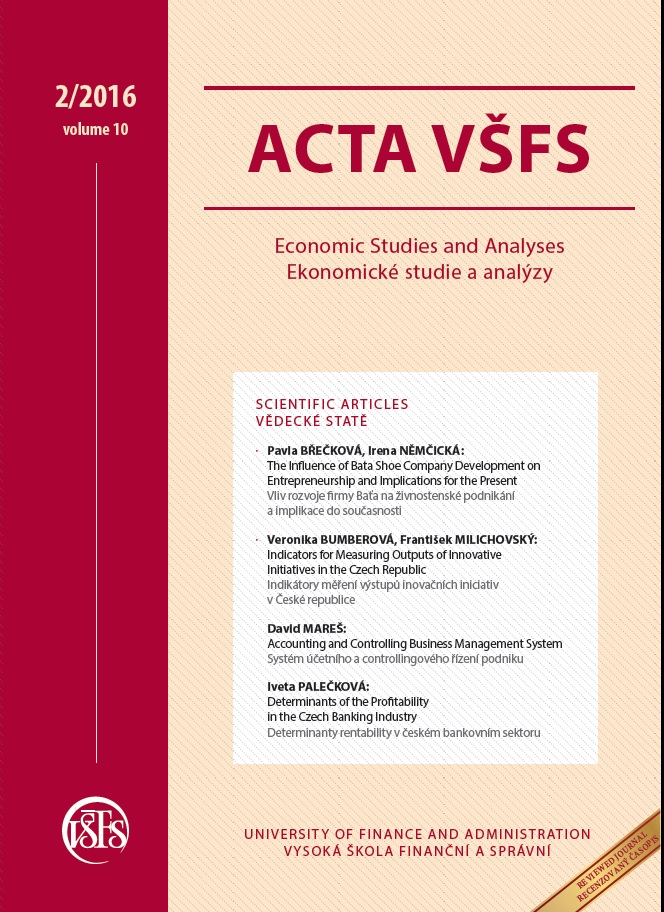 Summary/Abstract: The aim of this paper is to examine the influence of the expansion of Bata Shoe Company on entrepreneurship in the period of the First Czechoslovak Republic1 and to find a parallel with the current problems of entrepreneurship in the Czech Republic after almost a century. The partial aim was to trace the impact of the significantly development-oriented strategy of Bata Shoe Company to a steep decline in numbers of entrepreneurs in the shoemaking field in the stated period of 1920s and 1930s, and to realistically describe business environment of that time with the emphasis on entrepreneurship. Another partial goal was to find the above mentioned parallel with present and to identify any implications for the current situation and development of entrepreneurship in this country in general. Entrepreneurship comes back to centre of academic interest and is highly topical these days as one of the pillars of regional sustainability, which is, however, on decline. Concerning the methodology, the research is based on our own examination and processing of unique archive of statistical, descriptive and legislation resources from 1920s and 1930s. In addition, it is based on the analysis of the current entrepreneurship in CZE with an emphasis on artisan trades, as also other data and their comparison from surveys and analyses made by authors in the past were used. The results of the research proved that growth and development strategy of Bata Shoe Company had only a limited impact on the steep decline of entrepreneurship in the field of shoemaking, while among other a technological progress (and industrialisation) played an important role. In order to have higher validation of the result, the archive data were also compared with fields that did not undergo such dramatic technology change. The article also presents a number of parallels with the current entrepreneurship situation.