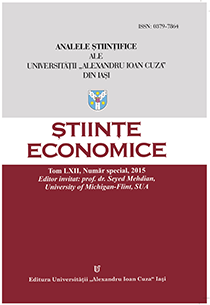 Summary/Abstract: This study introduces some aspects regarding the link between monetary policy and economic growth, through a rule well known in the literature which is named Taylor’s rule and through the concept of sacrifice ratio which encompasses the impact of the cost of disinflation on the economic growth of a country. In this paper, we rely on estimates of the growth of potential GDP of the National Bank of Romania for the period 2003-2006 while for the period 2007-2012 we rely on the estimates reported by the International Monetary Fund. Thus, we carry a deterministic exercise for computing the interest rate on the period 2003-2012 as depicted from the Taylor’s rule and we compare it with the effective monetary policy interest rate used by the National Bank of Romania. In the same time, we calculate the sacrifice ratio for the period 1997-2013 so as to be able to form an opinion regarding the cost of disinflation and its comparison with the typical estimates for larger time spans and for other countries.