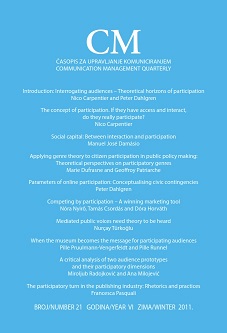 Summary/Abstract: Participation is a concept that is being used in a wide variety of fields, and that has obtained an evenly wide range of meanings. This article attempts first to ground participation in democratic theory, which allows introducing the distinction between minimalist and maximalist forms of participation. In the second part of the article, a broad definition of the political will be used to transcend to logics of institutionalized politics, and to emphasize that the distribution of power in society is a dimension of the social that permeates every possible societal field. Both discussions are used to describe the key characteristics of participation, and to increase the concept’s theoretical foundation. The article then zooms in on one of these characteristics, namely the difference between access, interaction and participation, as this distinction allows further sharpening the key meanings attributed to participation as a political process where the actors involved in decision-making processes are positioned towards each other through power relationships that are (to an extent) egalitarian.