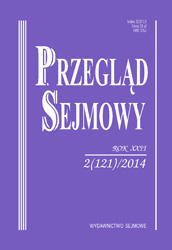 Summary/Abstract: The author examines the issue of elections to the European Parliament in the context of the level of interest of voters in those elections. It presents the concept of “fi rst-order elections” and “second-order elections”, at the same time pointing out that the EP elections over 30 years are considered to be in the latter category. Attention is paid to the mechanisms by which the legislature may attempt to strengthen the level of citizens’ participation in public life and which can have a positive impact on voter turnout in the elections to the European Parliament. These include compulsory voting, holding the election on a day which is not a working day, a two-day vote, the date for the conduct of this election, the financial motivation behind standing in elections or enthusiasm for the idea of the EU after recent accession.