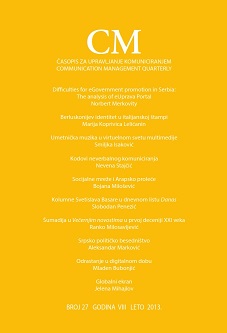 Summary/Abstract: For successful engagement in politics, memorable public appearance, synthesis of good orator and good oration has always been necessary. In the first part this paper the author analyses the political rhetoric in general, its basic features and some specific features, while in the second part, the emphasis is placed on the Serbian political rhetoric and its specific characteristics. The second part is interwoven with the history of Serbian political rhetoric in order to explain the main thesis of the paper that the content of orations, and the public appearance, is dependant on the specific historical circumstances in which the Serbian government and the politicians were at the given time.