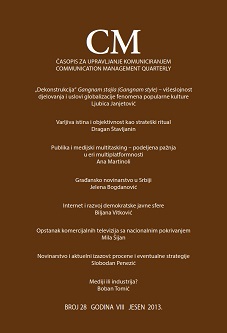 Summary/Abstract: In this paper, we analyzed the phenomenon of contemporary popular culture, i.e. a Gangnam style Korean pop song. Aim of this study was to determine the impact and meaning of the aforementioned song on the enjoyers of popular music (especially adolescents), and to find the reasons for a rapid global popularity of the song. The analysis included the technological and economic development of modern society as the context that enabled the emergence of global phenomena and popular culture. The popular culture was observed as the “culture of copies” in which most of the cultural experiences were obtained using and observing copies and the validity, whereas the very existence of originals was put aside. We attempted to explain the meaning of popular culture as an everyday cultural experience by reviewing the scientific literature on popular culture and music. Furthermore, the content analyses of some of the articles available on the internet provided us with an insight into the effects of Gangnam style and the reasons of its great popularity. Some of the reasons imposed during the analysis were as follows: partially different style of Gangnam style in comparison with the one typical of the mainstream popular-music, fan phenomena appearance, accompanying dancing choreography and rhythmic visual content, as well as prophetic-apocalyptic dimension of contemporary global society.