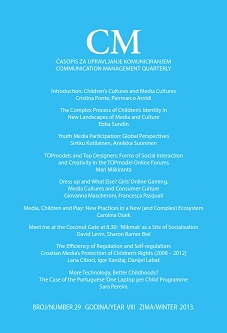 Summary/Abstract: Researchers point out media participation as a growing phenomenon among audiences, especially among young people in western societies. We broaden the gaze outside Europe to more global perspectives on their media participation, based on the Comparative Research on Youth Media Participation (2009-2011), in which we have been studying the audience activities of young people, explored with questionnaires, interviews and media diaries of 11–18 years old in Argentina, Egypt, Finland and India. In this article the statistical results from the survey are reflected with Nico Carpentier’s (2011) structuring four elements of media participation: identities as participatory subject positions in a communicative process; organizational structures supporting or declining the levels of participation; the available technology supporting or declining the participation process; and quality which the author relates to quality discourses in media production, including their participatory practices, aesthetics, performances, etc., which are based on the skills of the producer/ user. Based on this reflection, the article suggests a discursive differentiation of the aspects of youth media participation. Moreover, the study suggests emphasis on media and information literacies together with participatory activities in relation to the media and in the research on media participation from the user’s perspective.