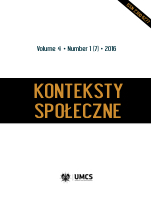 Summary/Abstract: The article aims to analyse the role of social media in initiating and organising protest and revolutionary movements. Social media, particularly Facebook and Twitter, are widely believed to have been used by activists involved in the global wave of protests and revolutions after 2009. However, the assessment of their role wavers between technological determinism and minimising the impact of new technologies. Considering the current state of research, the author offers his answers to a number of questions: (1) To what extent and how are social media used in the processes of political communication, mobilisation and organisation of protest and revolutionary movements? (2) What is the relation between the old and the new media? (3) What is the relation between the online and offline dimension of collective action? (4) Why has the occupation of public space become the dominant tactic of protest and revolutionary movements in the age of social media?