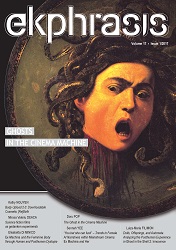 Summary/Abstract: Ex-Machina is a 2015 sci- thriller, written and directed by Alex Garland, and starring Domhnall Gleeson, Oscar Isaac and Alicia Vikander. Critically acclaimed, the movie explores the relations between human and posthuman, as well as the relations between men and women. The article analyzes four main themes: the dystopian spaces of relations and con icts between human and posthuman entities; the gender issues and the violent tendencies represented both in humans and in AIs; the construction and the representation of women’s bodies, roles, identities and images; the control and the manipulation perpetrated by “authoritarian” individuals on feminine bodies. The goal of my contribution is to show the reasons of the “double male fear of technology and of woman” (Huyssen 226), and I hope that my re ections could encourage a debate on posthumanism and on gendered power relations.