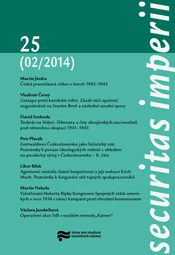 Summary/Abstract: The study is a loose continuation of a text by the same author published – under the name “A long way through the woods. Political developments in Ukrainian integral nationalism and the presumptions of the Ukrainian Resistance Army” – in No. 22/2013 of this journal. After Germans did not approve of a unilateral declaration of the Ukrainian state by the Organization of Ukrainian Nationalists – OUN(b), the so called Bandera’s groups had to look for new approaches. After a lengthy state of hesitation, some kind of hibernation in illegality followed accompanied with an unclear relationship to the Nazi occupation power. Lively discussions were underway in the organization concerning the future steps; however, echoes of dissatisfaction coming from the lowest levels – in the wake of the intensified occupational terror – forced the organization’s die-hard core to adopt significantly harder attitude toward Germans than would be appropriate to their strategic aim of concentration of forces for the future grand uprising, which was supposed to come after the German Empire had been weakened by the fight against Stalin. The Ukrainian Insurgent Army (UPA), which was a fruit of this initiative, was not, despite its later nimbus, the first liberation partisan formation. It had been preceded by Taras Borovec, who was a leader of an eponymous armed force, though considerably more volatile when it came to tactics, and without a similarly strong appeal for the local population. Moreover, Soviet partisan formations began to apper in the area of Volyn and Polesie in 1942, which made the OUN(b) hurry the armed insurgency. At the beginning of 1943, the UPA undertook a massive anti-Polish action with the civilians in Volyn being its victims.