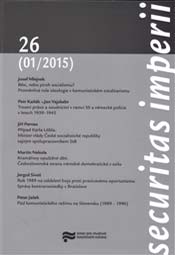 Summary/Abstract: The author explores the subject of the fall of the Communist regime in Slovakia in 1989 and 1990 in the study. He lays out chronologically the main events of the period in question, including the growth of the opposition movement in the second half of the 1980s and the main streams within it, the emergence of the leading anti-regime movement Public Against Violence (VPN) and its political strategy, and the free elections of 1990. Particular attention is paid to the difference between the VPN and its Czech partner Civic Forum (OF), in particular the former’s efforts to achieve the quickest possible penetration of the media in the form of Štúdio dialóg (Studio Dialogue) and the organisation of the march Hi Europe!, symbolising the fall of the Iron Curtain. It also explores political talks between representatives of the VPN and the Communist Party of Slovakia (KSS), as well as the method of reconstructing the Slovak government, which after lengthy negotiations was appointed on 12 December 1989. In conclusion the study lays out the political parties and their election results in the first free elections in 1990, which legitimised the revolutionary changes of November and December 1989.